But even if you don’t care what’s up with strings and multiverses, you should worry about what is happening here. The foundations of physics are the canary in the coal mine. It’s an old discipline and the first to run into this problem. But the same problem will sooner or later surface in other disciplines if experiments become increasingly expensive and recruit large fractions of the scientific community.

Indeed, we see this beginning to happen in medicine and in ecology, too.

Small-scale drug trials have pretty much run their course. These are good only to find in-your-face correlations that are universal across most people. Medicine, therefore, will increasingly have to rely on data collected from large groups over long periods of time to find increasingly personalized diagnoses and prescriptions. The studies which are necessary for this are extremely costly. They must be chosen carefully for not many of them can be made. The study of ecosystems faces a similar challenge, where small, isolated investigations are about to reach their limits.

How physicists handle their crisis will give an example to other disciplines. So watch this space.

So this proves the earth spins. Could still be flat though.

Shapin’s book is probably the best brief introduction to what science is and how it appeared and when it appeared. It begins, famously, with a sentence which is enough to make many people roll their eyes: “There was no such thing as the scientific revolution and this is a book about it.”

It was determined that the U.S. health-care system is not equipped to address the needs of pregnant men. Infants are unaware that the sensation of being tickled has a cause outside themselves. The larger a male howler monkey’s hyoid bone, the smaller his testes. Sleeping Germans given incorrect definitions of Dutch words are not hindered in their language acquisition. Painful injuries fail to wake most sleepwalkers.

Indonesia announced plans to imprison drug traffickers on an island surrounded by crocodiles. Crocodiles can sleep with one eye open and, perhaps, one brain hemisphere awake. Rats have neurons that track time spent and distance traveled on a treadmill. After attaching a severed arm to a large pendulum and tightening the tendons with fishing line and guitar pegs, researchers found that a clenched fist can strike a padded dumbbell with twice the force of an open hand before delicate bones break. A man with H.I.V. died after his tapeworm got cancer.

And so much more.

Consciousness Began When the Gods Stopped Speaking.
How Julian Jaynes’ famous 1970s theory is faring in the neuroscience age. 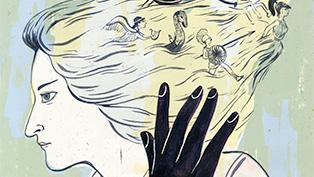 Language needed to exist before what he has defined as consciousness was possible. So he decides to read early texts, including The Iliad and The Odyssey, to look for signs of people who aren’t capable of introspection, people who are all sea, no rime. And he believes he sees that in The Iliad. He writes that the characters in The Iliad do not look inward, and they take no independent initiative. They only do what is suggested by the gods. When something needs to happen, a god appears and speaks. Without these voices, the heroes would stand frozen on the beaches of Troy, like puppets.

By The Odyssey, the characters are capable of something like interior thought, he says. The modern mind, with its internal narrative and longing for direction from a higher power, appear.

And the language! What language! It has a Nabokovian richness. There is an elegance, power, and believability to his prose. It sounds prophetic. It feels true. And that has incredible weight. Truth and beauty intertwine in ways humans have trouble picking apart.

The idea behind cloud computing, as pioneer Amazon Web Services believed when it launched its first utility compute and storage products eight years ago, is to abstract away the underlying hardware and provide raw resources to programmers for applications to run on.

On a recent visit to Mountain View, I got a peek at how the Google Maps team assembles their maps and refines them with a combination of algorithms and meticulous manual labor – an effort they call Ground Truth.

What made Albert Einstein one of the greatest scientific geniuses the world has ever known? His scientific breakthroughs revolutionized the way we understand the universe. The World Science Festival, in partnership with the 92Y’s 7 Days of Genius Festival, presents an in-depth look into the genius of Einstein.

What is spacetime, really?